I locked my hall door at 6:45am this morning and started walking down Gardiner Street to get the 53 bus to Dublin Ferryport. I reached the intersection of Summerhill, when, to my left,  a sudden surprising burst of colour grabbed my attention.  It was sunrise,  something I haven’t seen for ages.  It was very beautiful and filled a large part of the sky.  I took it as an omen,  a harbinger of good to come, even though my rational mind said that it was due to petrochemical smog particulates.  I told my rational mind to feck off. Just for a while,  mind you.

There were several young German and UK people on the bus with backpacks, much heavier looking than mine, and I had a brief terrible moment of self doubt where I wondered if I was being deluded going off on a trip like this and, an old favourite, what will people think. Will they think I’m a mad old eejit. Gollum made a guest appearance. I invoked and channelled my spiritual guide and teacher,  Fr Jack Hackett of Craggy Island,  and told these thoughts to feck off and that I was grand. I had to use the bad f-word, you know, the one with an ‘u’ and not an ‘e’. In the blink of an eye I was grand.  Then something else caught my attention and I forgot those thoughts until I write this and see them now empty of any real substance. Thanks Fr Jack. 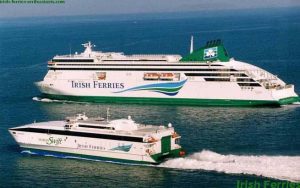 The Ferryport was surprising uncrowded and I was through check-in in a jiffy. They have built a new departure lounge and it was a world removed from the horrible conditions of the old “cattle boat”. I paid a few bob extra and got the fast ferry and the “Jonathan Swift” whisked me off to Holyhead in 2 hrs.  A short wait in Holyhead and a change in Chester where my train was already on the platform and off to London where I arrived at 3:30pm. I choose my hotel because it was near both arrival and departure stations to minimise walking.

The hotel was nondescript and exactly as advertised : basic.  It was clean and functional. Breakfast was surprisingly good for such a cheap price.  My room was on third floor and I trotted up there no bother with my backpack on my back. I recollected when I was in Thailand a few years ago and also on a third floor and could hardly drag my bag up because it was so heavy. The gym and judicious packing has eliminated this problem.

Great to be back in London.  So many positive memories of the place.  I spent time on the upper deck of buses doing the nostalgia tour and visiting some significant personal landmarks. I also met up with some friends old and new.  I was I passed by the amount of new building work going around the city,  especially around Tottenham Ct Rd tube station.  I went to visit a coffeeshop in St Giles High St and not only was the place missing, the whole street had gone. I still noticed a lot of homelessness and signs of serious social and mental health problems wherever I was. Looks like the reconquest of the oligarchs is almost complete and soon all frippery frappery of democracy will be subsumed and the New Feudalism will rule again,  just like it did in the past. Mr Corbin, we await you.

Slept well in the hotel although it was a bit warm and there was little ventilation. I had to close the window because the road outside was very noisy. Before I started this journey, I was determined to leave my impatience and expectations of things being a certain way back home in Dublin. I can get a bit pernickety about having a certain temperature at home and in bed,  a certain comfort level and a low level of noise and distraction. I guess you could say I’m a bit of a control freak about my immediate environment.  That attitude and travelling as I travel sure don’t go hand in hand. So the attitude has to go.  I made up my mind that the heat and noise wouldn’t bother me and bother me it didn’t and I had a good night’s sleep. Done and dusted.

I had a full English breakfast at the hotel, mindful that it would possibly be quite a while before I had sustenance of such dubious gastronomic delight again. It was shite. It wasn’t really but felt unhealthy so my brain translated this feeling as ‘shite’. I noticed how obese many of my fellow diners were. I’m also conscious that I’m the heaviest I’ve ever been and don’t like the lack of discipline this demonstrates. I used to cycle a lot and that kept my weight in check but hardly do so any more as my office is a 7 minute walk from home. My travel diet is generally breakfast and 1 main meal a day with occasional snacks along the way. I’m sure I’ll lose a few kilos by the end of the trip.

I got the Eurostar from St Pancras to Brussels and then on to Cologne where I was to spend the night.  I was surprised by the security kerfuffle there and had to go through airport type checks.  I had a little clasp knife in my pack.  It had a folding 80cm long blade, about 3 inches in old money. It was tagged in the x-ray and they were nearly going to take it off me but a kindly Chinese security man said I could keep it.  He said it was because of my age! Being a golden oldie has its advantages.

As soon as the train pulled out of the station,  I nodded off and came to in Lille where I promptly nodded off again until just outside Brussels. Pity train companies don’t charge but perceived distance instead of actual distance. I’d be quids in. Being Euros in doesn’t quite have the same ring, does it!

When we arrived in Brussels I knew that I had about 15mins to catch my connection to Cologne. I got into a bit of a flap because I couldn’t remember the final destination of the train and subsequently couldn’t find the proper platform. There wasn’t a single railway employee anywhere so I deduced the platform by departure time and got there in time. When I looked at my ticket again, the platform number was on it.  Doh! Again, I nodded off as soon as the train pulled out and awoke just outside Cologne, feeling a bit sweaty and disconnected. The weather is a bit hot,  a bit too hot for me anyway and I’m dressed for the colder climates I’ll be visiting. As soon as I had my pack on my back and hit the main concourse of the Hofbahnhof, the central station, my excitement and energy kicked it and I was grand again.

I made my way to the hostel, checked in, dropped my bags off and went out for a meal and a ramble around. It was about 10pm now. I decided to stay in hostels instead of hotel so I would meet people and save money. From experience of past trips, it can get a bit alienating travelling on your own so I wanted to avoid such loneliness. The hostel itself was like something from 1970s Amsterdam with a folky bohemian cafe attached to the check-in area and had a wonderful old mechanical cash register operated by pulling a lever on the side.  It made a glorious noise, ker-chung. I said to the very friendly efficient and very literal minded young woman who checked me in “it’s like Amsterdam in the 70s here”.  “I don’t know” says

she “I was never there in the 70s” ‘Jaysus’,  I thought to myself,  ‘of course you weren’t there, your parents were probably schoolchildren then. This is a conversational gambit, you’re supposed to say… I reply… you respond… and we have a conversation’. But of course I didn’t say this,  I smiled slightly insanely and said something like “ah” thereby possibly confirming for her that all old people are weird and probably a bit mad. I thought it was funny and it makes me smile thinking about it.

I love the energy of Cologne,  it has a great buzz.  Mind you,  it. Was Saturday night and the Germans are partial to the product of the hop. Draw your conclusions.

Woke up at 7am, had a shower and went down for breakfast.  A proper continental breakfast this time,  none of your rashers and sausages. My train was leaving at 3.30pm so I had 6 hrs or so to get an idea of Cologne.  As I often do in a new city,  I got a guided bus tour.  It was for 2 hrs and,  as you would expect,  covered the main sites.  Lots of references to the famous beer of Köln.  I can’t remember what it was called but it didn’t float  my boat,  at all.  The bus itself was a double decker one except that the last few rows were turned into a saloon type area around a central table. Nobody sat there except two young boys. Everyone sat in the regular forward-facing seats. I sat at the end so I could get a good view of both sides. There was a free headset with an English language commentary. It was informative and somewhat interesting,  if not very exciting.

What grabbed my attention,  for a while,  was the two boys near me.  I had registered them an typical European school kids; healthy, courteous and well-behaved. It soon became apparent that they were a couple and they became more affectionate and intimate with each other.  I found this incredibly sweet.  My kindly grandparent subpersonality came to the fore. Being,  as I am,  fiercely protective of the inviolability of the autonomy of young people,  especially in the arena of sexual identity,  I didn’t look or comment or engage then in conversation.  My sense was that this would be inappropriate.  Nevertheless,  I couldn’t help but reflect that they could do what they could do because of the courage of my generation who stood up when it was risky.

Anyway,  the journey ended.  We all went our separate ways, never to meet again.  I picked up my bag at the gepäckcentre and caught the train to Berlin.

More about that later.

Dreams and Dreaming the Dream

You may have missed