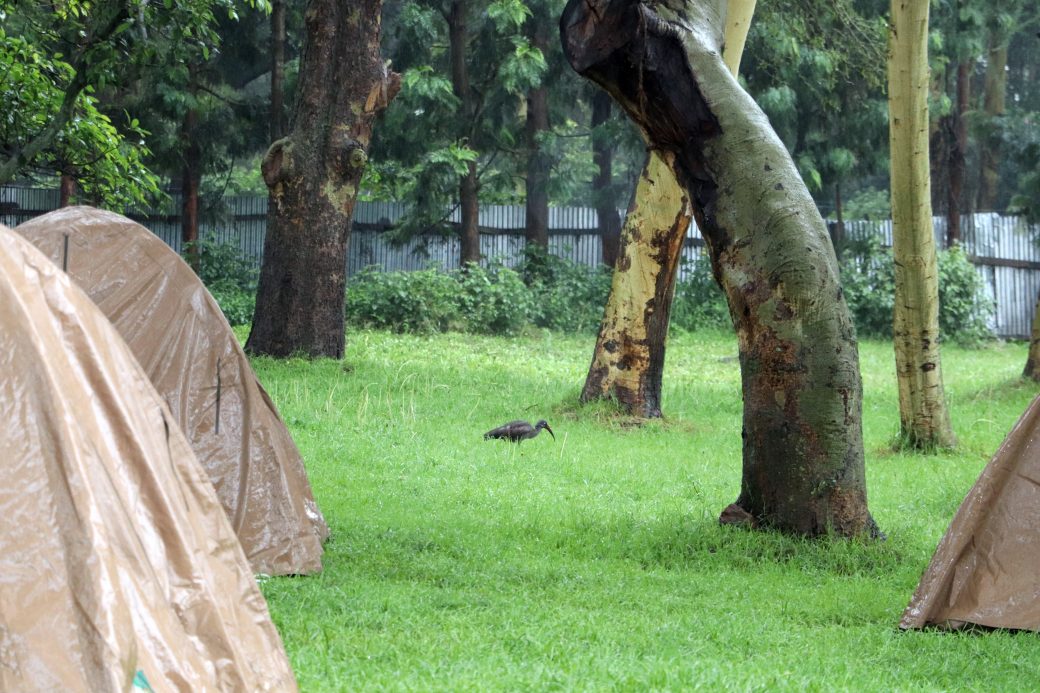 First day on the road. We had a meeting with group leaders and the rest of the group. Gemma is the tour leader and Often is the driver and also a tour leader. Gemma is English and Often is Kenyan. They showed us the layout of the van and where everything was as well as some overlander etiquette.

We left Karen Camp in Nairobi after breakfast and hit the road. Maybe I should say that the road hit us. The roads are diabolical and full of potholes. The weather in Kenya, as indeed in most of Africa is recently unpredictable. We are in the Short Rains Season where it should rain for about an hour or so each day and then be sunny. Instead, it rained torrentially for about a week with landslides and road closures all over the country. Our road was partially washed out and I think there were some detours as well. The traffic literally crawled along and there were lots of huge potholes. We eventually reached the blockage where a main part of the road was washed away and there was fast flowing reddish-brown water everywhere. One we got past this point, after a few hours, we could go much faster.

Before we did this, we stopped at a shopping resort to buy some provisions. We also had time to change money, have a coffee etc. The level of security was very strong. The entrance to the centre had security with bag scanning etc and so did the entrance to the shops themselves. Lots of cops around. I rambled around and went to have a coffee with a few of the guys in the group, new friends, Scott and Sam. The coffeeshop was no different to what you would get in Dublin or London or Paris or Copenhagen with the exception that all of the staff were black and the vast majority of customers were white or pinkish-beige with brown spots on, like myself. The staff were intensely polite and very helpful.

As a citizen of a country which suffered greatly under colonisation and fought against the colonisers for hundreds of years, I was disturbed and distressed to notice this and to also to recognise that, because of the colour of my skin, I would be classified as kin of the colonisers. I certainly don’t feel white but then, I’m obviously not black. But then I remember the harm done to Africa by the catholic church and the mainly Irish missionaries who blinded the people by religion while the colonists robbed them blind.

Anyway, I digress, must be an old guy thing.

We arrived at the campsite, a lovely resort type camping site on the shores of Lake Naivasha, a lovely freshwater lake renowned for its size and the variety of birds and its hippos. The grass was lush and different to what I expected in Africa.

Pitched our tents for our first night under canvas, had a meal and hit the sack.

Lake Naivasha is a freshwater lake in Kenya, outside the town of Naivasha in Nakuru County, which lies north west of Nairobi. It is part of the Great Rift Valley. The name derives from the local Maasai name Nai’posha, meaning “rough water” because of the sudden storms which can arise.

The lake is at the highest elevation of the Kenyan Rift valley at 1,884 metres in a complex geological combination of volcanic rocks and sedimentary deposits from a larger Pleistocene Era lake. Apart from transient streams, the lake is fed by the perennial Malewa and Gilgil rivers. There is no visible outlet, but since the lake water is relatively fresh it is assumed to have an underground outflow.

The lake has a surface area of 139 square kilometres  and is surrounded by a swamp which covers an area of 64 square kilometres, but this can vary largely depending on rainfall. It is situated at an altitude of 1,884 metres. The lake has an average depth of 6 metres, with the deepest area being at Crescent Island, at a maximum depth of 30 metres.  Njorowa Gorge once formed the lake’s outlet, but it is now high above the lake and forms the entrance to Hell’s Gate National Park. The town of Naivasha (formerly East Nakuru) lies on the north-east edge of the lake.

The lake is home to a variety of types of wildlife including over 400 different species of bird and a sizable population of hippos. The fish community in the lake has been highly variable over time, influenced by changes in climate, fishing effort and the introduction of invasive species. The most recent shift in the fish population followed the accidental introduction of common carp in 2001. Nine years later, in 2010, common carp accounted for over 90% of the mass of fish caught in the lake.

There are two smaller lakes in the vicinity of Lake Naivasha: Lake Oloiden and Lake Sonachi (a green crater lake). The Crater Lake Game Sanctuary lies nearby, while the lake shore is known for its population of European immigrants and settlers.

So there, now you know. But the rain kept coming. A washout would be a good description of this day. It rained like hell for the first few days. I didn’t really do much except acclimatise to Africa and go on several walks around the area.